Happy New Year everyone! I hope everyone had a wonderful holiday season!

I didn’t mean to take such a long break from blogging, but it happened anyway! Holiday travel took it out of me, and I couldn’t get the hang of blogging away from home. Not to mention I nearly sprained my jaw from overeating. But I do love this time of year…

When people know you love to read, they try to find bookish presents for you. My husband toyed with the idea of buying me an eBook reader, but I am reluctant to go down that road, and I’m not even sure why myself. I just can't imagine reading from a screen being as satisfying as paging through a book.

My husband found this review of the Sony version on Gizmodo, a gadget blog he reads. Though I haven’t tried an ereader yet, and I’m not going to be a naysayer until I do, I had to nod with recognition at the woman’s comments:

She feels disoriented without the constant, tactile feedback of the book's thickness—that unconscious reminder of just how much of the story is left to go (are there really enough pages remaining for Mr. Darcy and Lizzie to work things out??). Sure, there are page numbers on the screen, but it's not the same.

I found her reaction simple and somewhat profound.

Gizmodo also had a post about Amazon's highly promoted "Kindle", their version of the ebook reader. I haven't read any real reviews of it, but I'd be interested to hear what people think. Do any of you have an ebook reader? If so, what type? And what do you think of it?
Posted by Gentle Reader at 11:29 PM 15 comments: 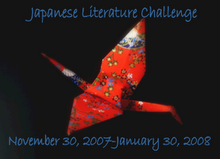 Bellezza at Dolce Bellezza is hosting a wonderful challenge, The Japanese Literature Challenge, which runs from November 30th through January 3oth, 2008. The parameters are that you have to read three pieces of Japanese Literature, from any genre, and post your opinions on your blog.

I'm a little late in joining in, but I am going to try to do this one--though I'm not sure how far I'll get.

There are so many amazing pieces of Japanese literature out there--this is just the push I need to get reading some of them. And Bellezza is offering gorgeous prizes, by the way. So I have to urge you to join in, too!

I'm going to start by blowing the dust off something that's been on my bedside table for months: Haruki Murakami's The Wind-Up Bird Chronicle. Then I'll see what else strikes my fancy--there are so many great books to choose from.

And if you are thinking you want to do this but aren't sure what to read, Bellezza has put together a nice list of Japanese literature on her blog.
Posted by Gentle Reader at 11:37 AM 10 comments:

The Golden Compass, and odds and ends

Yesterday I took my sons to see the movie version of Philip Pullman's The Golden Compass, after my eldest had raced through the three books of Pullman's series His Dark Materials Trilogy (The Golden Compass; The Subtle Knife; The Amber Spyglass). I haven't read the books, so I came to the movie without too many expectations. My son, however, had many criticisms--mostly about how the filmmakers changed things from the book--which he whispered to me in an outraged tone through the course of the film. There's nothing like an indignant 11-year-old! But most egregious to him was how the ending, he said, was cut off.

When we read about the tortuous process of making the movie (on Wikipedia), it became clear that the filmmakers had had to make many changes, in content and in theme. In theme, to appease Christian groups who were upset by the story's anti-religious themes, and in content to force the story into a movie-length one, that stands on its own but is also obviously a set-up for a sequel.

This last is what really bugged my son, and what also bugs me about film adaptations like The Lord of the Rings. I guess it has to be done if you're going to do a series of films, but the cliffhanger ending, while fine on TV, just doesn't work in a theater. Especially when you know you'll be waiting at least a year for the next installment of the story.

I haven't posted much lately, having been extremely busy with the kids. Also busy with my striking, picketing husband (see United Hollywood for updates on that crazy situation), and the holidays in general. But I'm still reading.

My book group has chosen (okay, I pushed this one) Anne Enright's Booker-winning The Gathering for our next book, and I'm very excited to read it. And I'm finishing Somerset Maugham's Of Human Bondage, which has been a fantastic read. More on that soon.
Posted by Gentle Reader at 7:31 AM 14 comments: