Do you take breaks while reading a book? Or read it straight through? (And, by breaks, I don’t mean sleeping, eating and going to work; I mean putting it aside for a time while you read something else.)

I do take reading breaks. It depends on the book. Sometimes you just can't put a book down. Love those compelling reads that keep you up until 3 a.m., even though you have to be up and functioning the next day.

But that doesn't happen to me as much as it used to, mostly because life gets in the way. I'm so tired most of the time that I can fall asleep on the most compelling book. So now I do take reading breaks. If something doesn't really grab me, I find I put it down and forget about it for awhile, maybe read something else in the meantime, and then I might pick it back up again. But I also occasionally give up on a book entirely--something I never used to do when I was younger.

I'm really much more compassionate with myself these days. I've relaxed the reading rules. I don't beat myself up if I don't finish a book, or if I want to take a break from it.
Posted by Gentle Reader at 6:28 AM 12 comments: 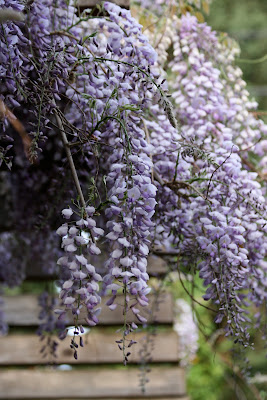 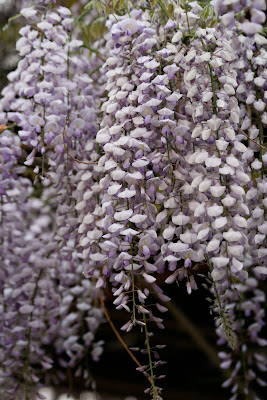 It's officially spring now, according to the calendar, but the season arrived here in Los Angeles about a month ago. My backyard wisteria is insane, and I'm enjoying all sorts of blooming around the neighborhood--tulip magnolias, lilac vines, cherry and plum blossoms.

I've managed to do a little bit of reading this weekend, moved the bookmarks forward in two different books. First off, I started Gervase Phinn's memoir of his career as a school inspector in the Yorkshire Dales, called The Other Side of the Dale. The cover copy calls Phinn "the James Herriott of schools." I read and loved James Herriott's books about being a veterinarian in the Yorkshire Dales when I was a kid, so this sounded like a good bet. And while the stories don't have the drama of Herriott's, the writing does have a gentle wit that I'm enjoying.

I also (finally) started Sarah Waters' novel Fingersmith, set in Victorian England. It's been sitting on my shelf for quite some time, and I know it's one of those books so many have recommended to me. So far it's really compelling, drawing me into the story of a Victorian con game, and promising some interesting twists and turns in the future.
Posted by Gentle Reader at 7:53 AM 6 comments: 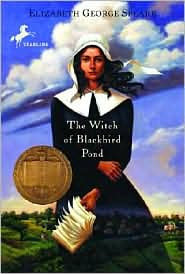 It doesn't surprise me a bit, considering the obvious success of crossover hits like the Twilight
and Harry Potter series, and the perennial appeal of books like The Witch of Blackbird Pond

After the LA Times article came out, cultural website Flavorwire published its list of top 10 Young Adult novels, and I liked the list--it has a few of my favorites on it, including The Witch of Blackbird Pond, by Elizabeth George Speare, and The Absolutely True Diary of a Part-Time Indian, by Sherman Alexie, as well as two of my husband's favorites, The Perks of Being a Wallflower, by Stephen Chbosky, and Nick & Norah's Infinite Playlist, by Rachel Cohn and David Levithan, which was also a sweet independent movie. Also on their list are a couple of books I've been wanting to read for quite some time, The Westing Game, by Ellen Raskin, and The Book Thief, by Markus Zusak.

The list didn't include some YA books I've heard a lot about lately, The Hunger Games trilogy, by Suzanne Collins, What I Saw And How I Lied, by Judy Blundell, and Rick Riordan's The Lightning Thief series.

And then there are those books out there, like The Curious Incident of the Dog in the Night-Time, by Mark Haddon, and Black Swan Green: A Novel, by David Mitchell, that have young adult protagonists but aren't necessarily categorized in young adult fiction...

What are your favorite Young Adult titles? Do you feel they have crossover appeal? If so, why?
Posted by Gentle Reader at 9:19 AM 8 comments:

Today's Booking Through Thursday question is:

How do you feel about illustrations in your books? Graphs? Photos? Sketches?

I don't have a strong opinion about illustrations in my books. I guess it really depends on the book.

As a child, I loved the illustrations in my copies of Alice in Wonderland (the originals by Sir John Tenniel), and in The Borrowers (illustrations done by Beth and Joe Krush), because they were really beautiful drawings, and I looked forward to coming across them while reading. It was like getting a wonderful little surprise every few pages. So I remember the magic of illustrations very well.

I just finished Patti Smith's memoir Just Kids, about her life in New York with Robert Mapplethorpe, which had photos sprinkled throughout. It reminded me of those reading experiences I had had as a child, enchanted by the illustrations I would come across. That's because the pictures were so great in this book--allowing a glimpse into a life, and perfectly illustrating the text. They also felt necessary, because they were often mentioned in the text, and were part of the story itself.

But generally speaking, I don't want or need illustrations for a novel. The language paints enough of a picture for me.
Posted by Gentle Reader at 8:12 AM 6 comments:

Some British reading, and a whiff of Spring 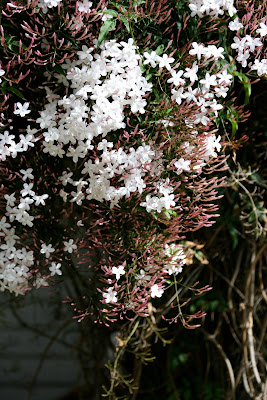 I wish I could post smells on this blog, to give you all a whiff of the jasmine that is blooming in my back yard. It almost overwhelms me when I walk out onto my back deck. I know my friends on the east coast could use a little of the beginnings of spring we are experiencing here in Los Angeles...

I won't blame the spring-like blooming (though it could be my allergies...), but for some reason I haven't been in the mood to read anything heavy lately. I've been testing the heft of Wolf Hall before I dive in, and I think it might need a little leavening, so I used up the last of my holiday gift cards to buy a couple of other English books, but in a lighter vein.

The lovely Litlove recently posted about Gervase Phinn's The Other Side of the Dale, and it sounded interesting to me, because I almost always like stories about British country or village life, and because Litlove said it was a "delightful and soothing sort of book", soothing being something I look for when I'm not in the mood for heavy. Phinn was a school inspector in the Yorkshire Dales, so he's called (on the front cover) "the James Herriott of schools"--and since I have such fond memories of reading James Herriott's books when I was a child, this sounds like it's right up my alley. 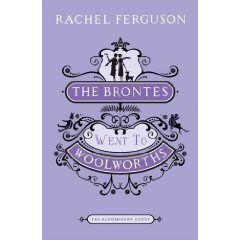 Another lovely blogger, The Indextrious Reader, posted about an English novel called Henrietta's War: News from the Home Front 1939-1942, by Joyce Dennys, a re-issue done by the Bloomsbury Group, which sounded intriguing. It wasn't available until later in the month, so I picked out another of their reissues--one with a whimsical title: The Brontes Went to Woolworths, by Rachel Ferguson. It's about three sisters growing up in London in the 1930s, and that's about all I know about it, except that I like the purple cover, so I'll let you know if I actually like the book or not.

There are several other British books I've been meaning to get to, like Nick Hornby's Juliet, Naked, Muriel Spark's Loitering with Intent, and Penelope Fitzgerald's The Blue Flower. More for the list!

One more photo for you, of the view from our front balcony, at sunrise: 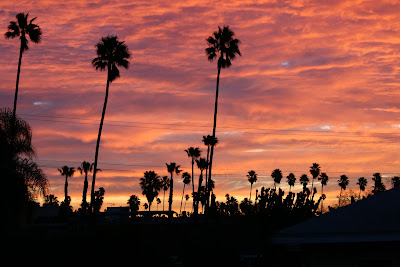