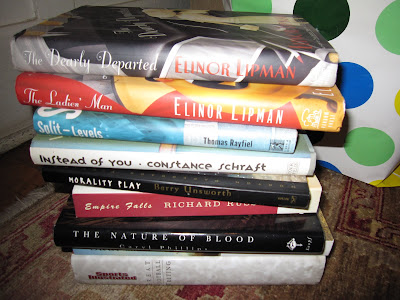 I had a lovely surprise waiting for me when I returned from my holiday trip. A bag of books addressed to G. Reader, from S. Claus. I don't know who my secret Santa was, but I really appreciate the gift! Here's a photo of my new stack of books, thanks to Santa's generosity.

I was planning to do a year-end round up of my favorites from 2008, but...I'm too lazy. Instead I've formed a resolution for 2009. I would like to try to do what Nan at Letters from a Hill Farm is doing (I've been a long-time lurker and fan of her blog), but I'm not as resolute as she is. She is going to try not to buy any new books this year, and get through her piles instead. I won't go that far, but I will say that I'm going to try to get as far into 2009 as I can without buying any new books. That's because, as I've mentioned ad nauseum here, I'm drowning in books. And they're all good books, books that I plan to read. Some day. My problem is that I keep getting distracted by the interesting books that I read about on my dear friends' blogs, or hear about from my sister-in-law, my cousin-in-law, or my book groupers.

So I'm resolving to get some badly-needed focus in my life, and to read my way through my piles and piles of books.
Posted by Gentle Reader at 1:27 PM 11 comments:

Holiday books for my son...update

Everyone was so lovely when I asked for advice about what to buy for my 12-year-old son for the holidays (we do a little Chanukah and a little Christmas in our family--Chrismukah?  With a visit from Chanuklaus?).  Thank you, everyone!  Now I have a wonderful list that will hold us for the next few gift-giving occasions, at least.
So far I have bought him a copy of Neil Gaiman's latest, The Graveyard Book, and J.K. Rowling's The Tales of Beedle the Bard, Standard Edition.  Yes, that's the standard edition, not the fancy-schmancy, super-expensive collector's edition.
My younger son (age 9) is a little easier to buy for, as I've already been through it with my older one.  But he was thrilled to receive HIS OWN copy of Rick Riordan's The Lightning Thief (Percy Jackson and the Olympians, Book 1) from his cousin, and never mind that we already have a set of the whole series, because this is HIS OWN copy.  I forget that he gets so many hand-me-downs, that even a used book doesn't feel like his own, poor kid.
I am also giving my younger one two books by Kevin Henkes, Sun & Spoon and The Birthday Room, because he liked Words of Stone so much.
I also received a nice present from my husband for my birthday--a Kindle: Amazon's Wireless Reading Device.  It arrived a little late because it was backordered, but I've had it now for a few weeks.  I've hesitated before writing about it, because I wanted to get used to it before I said anything.  But I'll tell you what I think a little later...now I've got to go and have some latkes with a little eggnog!

Opportunity for maximizing your charitable giving...

In these tough times I'm looking for ways to extend my charitable giving dollar. I've cleaned out my closets and given away much more this holiday season in a hope that it will help the needy, and I've been delivering canned goods to my local food bank, whose lines have already been obviously longer this year.

The ladies at Coffee Chat With 1000 Wise Women have another way to help out--a contest! It's called Easy as 1-2-3: Money for your Favorite Charity, and I'm clicking over there now to nominate my favorite charity so it will be in the running to receive the $100 that the site will donate to the lucky winner!

They're also adding $1 for every comment posted through December 31 in support of the charity that wins.

Sounds like a good way to support a good cause this holiday season. Hope you'll join me.
Posted by Gentle Reader at 8:25 AM 6 comments:

Booking Through Thursday--Time is of the Essence

Today's Booking Through Thursday question is:

1. Do you get to read as much as you WANT to read? (I’m guessing #1 is an easy question for everyone?)

2. If you had (magically) more time to read–what would you read? Something educational? Classic? Comfort Reading? Escapism? Magazines?

Yes, number one is easy to answer. No, I don't get to read as much as I want to. I don't know a single soul who thinks he or she has enough time to read. If you meet that person, let me know--because I want his or her life! As it is, I try to sneak reading time into crazy places like the carpool line...

As for question two, I'd say that if I had more time, I would read more of the books on the pile that is threatening to take over my room. I have an enormous TBR pile, so I'd tackle that first, with all that extra reading time the reading fairy is magically giving me. Then I'd go and read all the classics I didn't read in college. Then I'd just keep finding more...there are just so many interesting books out there.

I wonder how much time would really be enough? How much time do you have to read? How much more would you like?
Posted by Gentle Reader at 7:33 PM 10 comments:

Meh.  I had big plans to read this weekend, but got hijacked by children's activities, including a sports banquet, two birthday parties, a playdate and helping my middle-schooler study for finals. The only reading I got done was late Saturday night and early Sunday morning, but at least it was something!
I finished Chimamanda Ngozi Adichie's first novel, Purple Hibiscus, last week.  As much as I enjoyed it, I think I liked her second novel, Half of a Yellow Sun

better, because of the greater scope of the book.  Purple Hibiscus is a more intimate story, with an adolescent main character; Half of a Yellow Sun is concerned with a whole family, and has more points of view. And though Purple Hibiscus is set against the backdrop of political unrest in Nigeria, it is less a part of the story than in Half of a Yellow Sun.  Anyway--I enjoyed both books.
Now I'm in the middle of reading Somerset Maugham's The Painted Veil.  I read Maugham's semi-autobiographical Of Human Bondage last year around this time, which lit a fire in me to read more Maugham.  Well, a year later I've finally gotten around to the next of his novels on my list.  I also saw the recent movie version of The Painted Veil, starring Edward Norton and Naomi Watts.  I don't usually do that--see the movie before reading the book--but I happened upon the movie on cable, and I got drawn in by the scenery, and then kept watching because the story intrigued me.  The novel has a great set-up, and I'm enjoying Maugham's writing again this time.  I'm also intrigued by the idea, that I read in several reviews, that this is a feminist novel.  I suppose it's thought to be feminist because Maugham's main character is a woman who goes through immense changes--goes on a spiritual journey, really--and comes through it a changed woman.  I'm enjoying the transformation so far, but I'm only half way through the book.  I'll let you know what I think when I'm finished.  Maybe by next Sunday...
Posted by Gentle Reader at 9:27 AM 7 comments:

I just found out that one of the real forces of nature in the book blogging world, Dewey of The Hidden Side of a Leaf, passed away last Tuesday. I knew she had been in ill health, but her death came as a shock. I can't imagine the book blogging world without her, as she was one of those wonderful, energetic bloggers who created events like the 24-hour read-a-thon and Weekly Geeks, and was obviously a voracious reader and prolific blogger.

I always loved the quote she had posted that inspired her blog's title:
"Birth, life, and death -- each took place on the hidden side of a leaf." Toni Morrison

I need your advice... 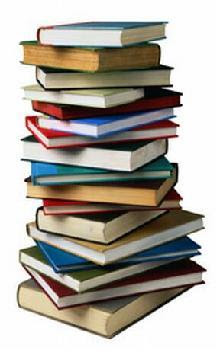 I'm committed to buying books for the holidays, as I've mentioned before, and I'm rarely at a loss for books to buy for any occasion. But I need a little help from you creative reader/blogger friends--I need suggestions for books for my son. He's 12 years old, and a good reader (thank goodness), but he has already read or outgrown many of the YA books I know.

He really loved the Harry Potter series, and Anthony Horowitz's Alex Rider books. He also read all of Rick Riordan's Percy Jackson series. He likes fantasy, and adventure, though I've had a hard time getting him to read the classics that I loved, like Treasure Island, White Fang, and the like.

I think he's ready for something a little more mature, but I'm not sure exactly what to get for him. My husband thinks he's ready for Stephen King, and he did read and get creeped out by The Girl Who Loved Tom Gordon.