Room, by Emma Donoghue, was one of those books I was afraid to pick up because I had heard just a tidbit about it: the book was about a five-year-old boy locked up in a single room, and it was from the boy's point of view. I have a rule about not reading books or seeing movies that feature children in peril. The subject is just too disturbing for me, so that's my rule.

However, I kept hearing about Room--that it was a wonderful book, that it was shortlisted for the Booker Prize, and that it was really original. So I broke my rule and bought it (on the iPad--the first book I've read in that format, by the way).

I'm happy I broke my rule, because I really enjoyed reading Room. The novel tells the story of 5-year-old Jack, who lives in one room with his mother, Ma. The reason they live there is that Ma was kidnapped when she was nineteen, and has been held prisoner in a specially-designed 12-foot-square back-yard shed by her captor, Old Nick.

I was wowed by Donoghue’s ability to effectively communicate the feelings, language and world of a five-year-old who was born and raised in captivity, cut off from society. I was drawn in, not just by the tension I felt about the danger Ma and Jack were in, but also by the intricacies of their world.

Spoiler alert—I’m sorry, I found I just couldn’t talk about this book without revealing some major plot points. If you really don't want to know what happens in the book, read no further. But I don't think knowing what happens spoils the book, so...

The first part of the book is about Jack and Ma’s captivity, and the tension and sense of dread builds really well as Ma realizes, and we realize, that there is no way mother and child will continue to survive in this situation as it is, and they have to attempt a daring escape plan. I was pleasantly surprised to find that a major portion of the story takes place after their dramatic escape, when they have to adjust to “Outside”.

While I was fascinated by the way Ma had created a routine that kept her sane and her son safe and healthy inside Room, I was even more interested in their life after captivity. I was so happy that Donoghue didn’t end the book when Jack and Ma escaped, but rather went on to explore what it meant for Jack to enter a huge, frenetic, bewildering world at the age of five, and how hard it was for Ma to reenter that world after seven years of being held prisoner.

Donoghue is spot on with the voices—obviously of Jack and the immensely sympathetic Ma, but also with Ma’s doctor, nurse, mother, brother, sister-in-law, father, and new stepfather. Each of these minor characters adds layers to the complexity of Jack’s adaptation to the big world outside, and to Ma’s difficulty dealing with her feelings of guilt and sadness.

I was pleasantly surprised by Room. I'm glad I got over my difficulties with the subject matter and went ahead and read it. It was an intense read, but very rewarding. It was one of those books I just couldn't put down--I know I stayed up far past my bedtime to finish it, and that's a rare thing for me these days. I'm looking forward to reading more of Emma Donoghue's work.
Posted by Gentle Reader at 8:00 AM 12 comments: 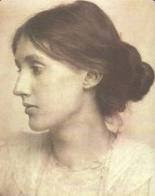 Hello again! It's been months, I know. I've been busy with...just everything, and I neglected this poor blog. I guess I needed a vacation from something, so blogging took a backseat.

But it's Virginia Woolf's birthday, so I thought I'd post a link to the 59 Things You Didn't Know About Virginia Woolf on flavorwire. I didn't know any of these facts, and many are disturbing or just plain sad. But I can relate to number 14: "Woolf delighted in the physical act of writing words on paper. From the age of 11, she was continually experimenting with different kinds of pens in hope of finding one that would provide the perfect sensation." Also, number 27 made me laugh: "After getting married, Woolf thought she should learn some domestic skills, so she enrolled in a school of cookery. Shortly after, she accidentally baked her wedding ring in a suet pudding." Poor Virginia!

I'm also rushing to finish Room, by Emma Donoghue (which is short-listed for the Booker Prize, I believe). I was scared to pick this one up, due to the subject matter, but it's not hard to read--just the opposite, in fact. It's a riveting page-turner, and I'm almost finished...

Anybody else reading any page-turners?
Posted by Gentle Reader at 12:15 PM 6 comments: