Of Human Bondage, by Somerset Maugham 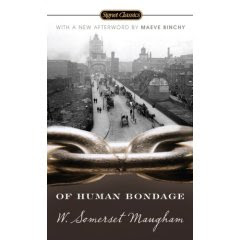 My first book for the Outmoded Authors Challenge was Somerset Maugham’s Of Human Bondage (Signet Classics), a semi-autobiographical novel about a young man’s long road to emotional maturity. I really enjoyed Maugham’s straightforward writing style, and I was drawn into the story by Maugham’s finely detailed characterization of Philip Carey, a young man stigmatized by a clubfoot, and looking for the love he never received as an orphaned boy.

I found the book truly compelling, mostly because Maugham creates a main character that is so completely human. His failings are so easy to relate to. I found him likeable even when I was mentally urging him not to make this or that self-destructive decision. And even when I was annoyed with Philip’s choices, they were such great examples of the choices all humans are faced with, the lessons all humans learn or don’t learn over their lifetimes, that I could easily relate to them.

It is fascinating to watch a young man struggle against the conventions and expectations of his time. Philip is a sensitive young man who finds the empty piety of his native religion unbearable, and cannot find a comfortable way to be an English "gentleman". He tries to break away from these conventions of society, but cannot easily find a philosophy or way of living that works for him, or fills the spiritual void he has. And the physical world betrays him, too. He cannot find work that is meaningful to him, and at one point in the book, he nearly starves.

Philip's disastrous relationship with the cruel and vulgar Mildred shows Philip that happiness in love is not the answer to the meaning of life, either. He lets go of that expectation (as a good Buddhist would) and though it doesn't solve all his problems, he comes that much closer to a measure of freedom. In fact, I felt Maugham's presence at my shoulder at times, saying, "Let go, my child, let go." Okay, I added that for effect, but you get what I mean.

Over the course of reading it, I nicknamed this novel “Of Human Frailty”, because all of its characters are so very deeply flawed. Maugham gives us a version of humanity with no sugar coating. As I thought back over the female characters in the novel, and realized they were all either vain, simpletons, fools, cruel or just completely self-centered, I wanted to accuse Maugham of misogyny, but then I surveyed the male characters, and realized I would have to call Maugham a misanthrope instead. But as much as most of the characters were wretched human beings, when Philip does get aid and succor from decent human beings, it is as truly surprising to the reader as it is to Philip, and that makes it all the more satisfying.

With that said, I thoroughly enjoyed the book. Though Maugham’s portrayal of the fallibility and frailties of human beings is rather bleak, he made me truly care about his substitute, Philip Carey. Philip’s journey is mesmerizing—I found myself deeply involved in this book, and thinking about my own ideas about free will and emotional bondage. And though the ending is ostensibly a happy one, this book raises more questions than it answers, which makes it a classic and one that I will read again.

cross-posted at the Outmoded Authors Challenge.
Posted by Gentle Reader at 11:39 AM

I read this years and years ago and what I remember mostly is disliking Mildred and that, as you say, it is a bleak book. Nevertheless, it was such a long time ago, and some books mean more to you after you have more experience. There are many books that I read and even enjoyed as a young person that took on a completely different and deeper meaning when read as an adult with years of experience behind me. Maybe I should reread OHB and see if I feel the same way.

jenclair--lol, Mildred is just dreadful! I could barely get over my disgust with her, and with him for being with her--but then I decided to take the long view, and figure out what he learned from the relationship. Which I probably wouldn't have done when I was younger, so there's your point, proven!

I love Somerset Maugham, but can you believe it, I've never read this, his greatest work! Thanks for a wonderful review, gentle reader; I'll certainly be picking this up whenever I next can.

litlove--I really enjoyed this. Sometimes Maugham is heavy-handed, but I find the semi-autobiographical nature of this book fascinating. I love the section where Philip is a medical student, and he begins to truly see the "lower class" people he treats. Reading this book made me want to read The Razor's Edge, for more on the spiritual quest, and also The Moon and Sixpence, as I believe it is based on the life of Paul Gauguin. Do you have a recommendation?

great recommendation - am adding to my reading list. i have only read The Painted Veil by Maugham (before there was a movie), and really enjoyed the tension and the insight into the minds of the characters. thanks
mel

I loved both The Moon and Sixpence, AND The Razor's Edge and would find it hard to choose between them. I also loved Up At the Villa, a little novella he wrote set in Italy that is really quite intriguing. Sorry - this is not reducing the books you have to choose from!

litlove--ha ha, that's okay, I can put all three on my long term reading list! It's always good to get recommendations. I think my sister-in-law sent me a copy of Up at the Villa some time ago--I'll have to dig that out. Novella-length is a plus these days!

O dear, I am feeling guilty. I have had this book on my shelf for a few years, attempted it twice, and couldn't get past ten pages. Augh! Thanks for the review, I am convinced this must be an excellent book and I'm going to give it another go (but I won't say when).

jeane--lol--I would never say when, either--too much of a commitment!