Review: Matrimony, by Joshua Henkin, and a BONUS!

Julian Wainwright is a New York child of privilege, but he doesn't want to follow in his financier father's footsteps and go to Yale. Instead he wants to write, and to do that, he decides to go to Graymont, a small New England college where he can study fiction writing with Professor Stephen Chesterfield. At Graymont, in Chesterfield's writing workshop, Julian meets Carter Heinz, the only other student Chesterfield thinks has any promise. Carter is a Californian from a less wealthy background, and he envies Julian his east coast wealth and polish, but despite their differences, the two writers become friends. And over time the twosome becomes a foursome, as Carter dates Pilar, and Julian dates Mia Mendelsohn, a smart and beautiful student from Montreal.
Matrimony's focus then becomes the relationship between Julian and Mia. It is the story of a marriage, pressured into existence, perhaps too early, by family tragedy, and tested by youthful mistakes. In a way, it is also a novel about growing up--about how some people avoid it, and some people are forced into it, but everyone, eventually, does it.

Henkin's prose style is straightforward, yet understated, and works really well in telling this story. The smaller moments in the story were well observed, but I found Henkin's understated style was even better employed in the situations that had more emotional weight. For example, there was a real power to the spare writing when Mia was interacting with her dying mother, or Julian was trying to figure out his parents' failing marriage.
As I've said many times, good characters really make a book for me, and Henkin's characters are very well realized. Carter, Julian's best friend/rival, was a character I enjoyed disliking. He has a huge chip on his shoulder and has a hard time growing up--he's flawed, like real people are--and his development throughout the story felt real.

Not only did I relate to the main characters, I also enjoyed the colorful minor characters, especially curmudgeonly (or maybe it's long-suffering) Professor Chesterfield, Julian's first writing teacher. His commandments about writing made me laugh: "Thou shalt never use pass-the-salt dialogue, Thou shalt populate your stories with homo sapiens, Thou shalt not confuse a short story with a Rubik's Cube." All good advice, I'm sure! In fact, Chesterfield gives a nugget of writing advice that is among the best I've ever heard, and gets around the old adage that you should only write what you know: "...you should write what you know about what you don't know or what you don't know about what you know. Keep it close enough to home that your heart is in it but far enough away that the imagination can take over." I read this to my husband, who occasionally teaches screenwriting, and he said, "Ooh, that's a good way to say it," and wrote it down.

The novel also has a wonderful sense of place. I happen to know many of the places Henkin describes, which made the book feel familiar and comfortable. But even the places I've never been felt familiar; to me that's a sign that Henkin's descriptions really ring true.
Overall, I found this book to be a quietly satisfying read, something I looked forward to returning to. The characters were like old friends, and the stories of love and friendship were skillfully woven together into an understated yet elegant package.

I've rounded up some information for you regarding this book. Author Joshua Henkin has a great website you should visit, and he did a really interesting interview about book groups on Lisa's blog, Books on the Brain.

Matrimony, which was a New York Times Notable Book for 2007, is being released in paperback this month.

And now for the BONUS:

In honor of this book's release in paperback, I'll be holding a drawing for a brand spanking new copy of the paperback edition of Matrimony during the week of September 22nd. More details then! 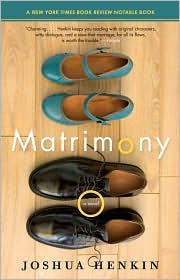 Posted by Gentle Reader at 9:26 AM

I read this book too. It is not a book I would RAVE about. But I would not say it was a book I hated either. It was a light read, I would not call it a beach. It was fun reading. It was a easy book to get into I read it in 2 days.

susan--I read it pretty quickly, too. It may be a strange way to describe a book, but I found it to be a comfortable read, and I'd agree with you, fun reading :)

I am getting a wee bit jealous. I am hearing about this novel ALL OVER THE PLACE. I feel like the nerdy kid that didn't get an invite!

I've read a lot about this book (lovely review, by the way) and will certainly be up for the draw in September. I'd love to read it!

Hey Gentle Reader! I've tagged you for a meme. See BiblioAddict for the details. = )

j.danger--first of all, love your name! Secondly, please don't feel left out :) Come back and sign up for my giveaway later. If you win, the author is going to inscribe the book--and how great would that be--"To J. Danger..." Also, he's a really nice guy, and you should contact him through his website. P.S., love your blog, putting you on my sidebar ;)

litlove--Hey, lady, how are you? Yes, this book seems to be everywhere. I saw someone describe it as a "coming-of-middle-age" novel, and I think that's apt. I'll put your name in for the drawing...but come back and remind me :)

The spare writing and small moments might turn it into magic, like On Chesil Beach. I think I'll give this one a try. Thanks for an insightful review! :)

hey! i quite liked it too, and also felt "comfortable" with the characters and places. let's discuss in book club! xo

matt--thanks, and hope you enjoy it.